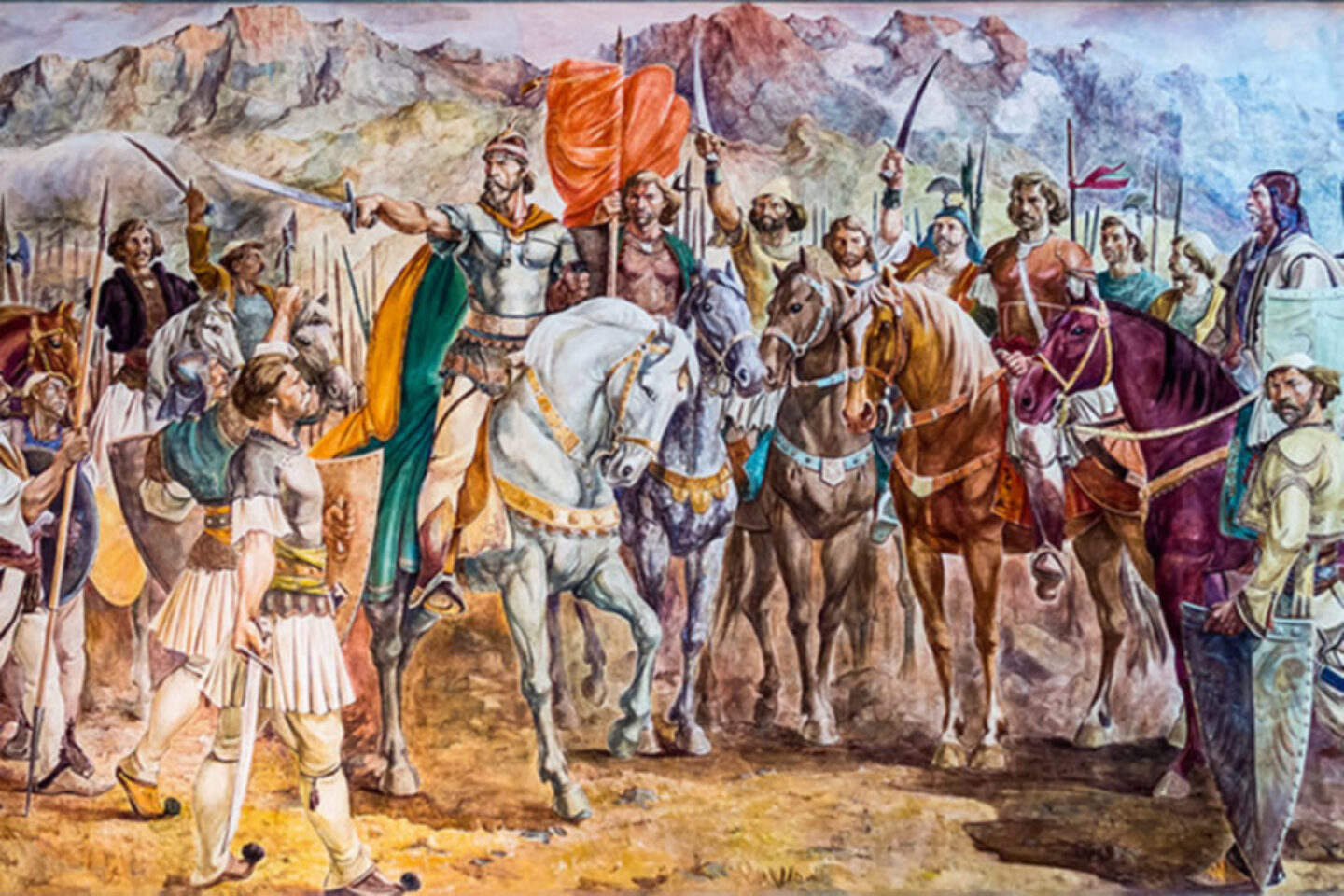 You could be forgiven for missing the announcement that 2018 is the ‘Year of Skanderbeg’. The Albanian government made the decision late last year, as 2018 marks 550 years since his death, in 1468. Now an obscure figure outside Albania, for centuries Skanderbeg was lauded throughout Europe. ‘Land of Albania! Where Iskander rose; Theme of the young, and beacon of the wise,’ wrote Byron in 1812. Who was this forgotten hero – sometimes called ‘The Albanian Braveheart’ – and what relevance, if any, does he have today?

Skanderbeg was born Gjergj (George) Kastrioti in 1405 in the town of Krujë in the Albanian mountains. He was the youngest son of a local ruler, but tiny Albania was under pressure from both west and east. His father, Gjon (John) Kastrioti, tried to walk a delicate political line to avoid being overthrown by either the Venetians or the Ottoman Turks. As part of this policy, he sent some of his sons east as political hostages, to be raised in the Ottoman court. Gjergj left his homeland at the age of nine for Adrianople (Edirne, in modern Turkey), where he was converted to Islam from Christianity and given a new name: Alexander, or in Turkish, Iskander. He was trained in the art of war and granted the title bey (lord or chieftain) and so the warrior ‘Skanderbeg’ came into being.

He proved to be a gifted military leader. By his early twenties he was making his mark in Ottoman campaigns against Christian territories, to the extent that his father had to apologise to Venice for his son’s activities. Gjon decided that Venice offered the best chance of security for his threatened domain and joined a doomed uprising against the Ottoman Empire, losing all his lands. He died in exile in a monastery in Greece. Skanderbeg’s military successes and his popularity at court protected him from suffering for his father’s disloyalty, but it did not protect his birthright and the Kastrioti lands were divided up among others. Skanderbeg requested to be granted a portion of his ancestral lands, but he was denied. That proved to be a costly mistake on the part of the Ottomans.

With no father or any lands to protect, whatever loyalty Skanderbeg might have had to the Ottoman Empire melted away. During a major Turkish defeat at Niš, Serbia, in 1443, Skanderbeg abandoned the Turkish side and turned homewards. At the head of a small force of Albanians who had also deserted, he put his expert military skills towards reclaiming his father’s lands. He established himself in the mountainous stronghold of Krujë and from there set about expelling the Ottomans from Albania.

This would have been a ludicrously difficult ambition for the ‘Albanian Braveheart’ and his small force of deserters – William Wallace, after all, only had the forces of England to worry about, not the entire Ottoman Empire. But Skanderbeg was more than just a gifted military commander; he was also skilled at making alliances. Soon after his return to Albania, he succeeded in uniting the local chieftains under his leadership and then he looked further afield. Rejecting the Islam of his youth, Skanderbeg presented himself as a Christian bulwark against Islam. He raised financial support from the Venetians, who were keen to have the Ottomans distracted, rather than looking towards western Europe. Pope Calixtus III provided funds for the Albanian campaigns and, after some impressive victories, named Skanderbeg Captain General of the Holy See. The Kingdom of Naples became another supporter. Italy was pinning its hopes on this Albanian warlord to hold back the Ottoman Empire from the coastline of Albania – from where it was only a short hop into Italy and the rest of western Europe. Skanderbeg did not let them down. For 25 years he held the Ottoman Empire at bay in Albania and weakened and harassed them in neighbouring territories.

At the age of 63, having put his affairs in order, the scourge of the Ottomans died. His legacy did not thrive – within ten years, Krujë had fallen and Albania would remain under Ottoman control until 1912 – but his legend did. The first account of Skanderbeg’s life and works was written by his contemporary, an Albanian priest called Marin Barleti, and it was followed by many others. Over 1,000 works have been written on Skanderbeg in 20 languages. Edmund Spenser and Henry Wadsworth Longfellow wrote poetry about Skanderbeg and a lost play about him is attributed (probably wrongly) to Christopher Marlowe. A portrait hangs in the Uffizi Gallery in Florence. His sword, a Damascan scimitar, is held in the Vienna Art History Museum. His statue stands in half a dozen European capitals and a bust in London carries an inscription describing him as ‘the Defender of Western Civilisation’. Yet he is barely remembered outside the Balkans.

With the decline of Christianity in the West and the collapse of the Ottoman Empire, the importance of a man who saved ‘Christendom’ from an Islamic empire perhaps seemed less significant. By the middle of the 20th century, many of the locations of Skanderbeg’s victories had been swallowed up in the monolith of Yugoslavia, and Albania itself was incommunicado, in the grip of an extreme form of communism. But times have changed. Communism was a failed experiment and empire is a dirty word. Across the world, countries and regions seek self-determination and communities struggle to stand up against the might of globalisation. A man who dedicated his life to fighting for his people and his culture against overwhelming odds – and won – might not be such an outdated ideal after all. Perhaps Skanderbeg could yet be a hero for our times.